When you go to college to play a sport, it essentially becomes your whole life. The only thing you can think about is eating, schoolwork, and how many minutes you have to nap before your next practice. I played Division I soccer at Fairleigh Dickinson University for three years. During those three years, I experienced the highs and lows the life of a college athlete entails: from being a last place team in conference to being a regular season champion. I experienced mass-bonding by traveling all over the North East for tournaments and staying in hotels with twenty-five of my best friends. 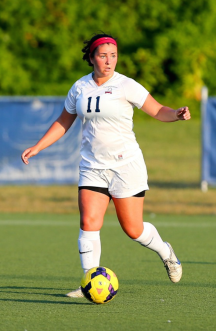 Being an athlete had its advantages, but it had some major setbacks, too. Often I was up at 5:30 in the morning to go to lifting and conditioning only to sprint to make it to class on time, smelling like a sewer.  I had to miss countless classes for games and often fell behind on schoolwork as a result. My schedule was too full, and as a result, I couldn’t work as much as I would’ve liked, so I ran out of money pretty fast. So after three years of being a college athlete, I made the decision during my senior year to quit soccer—something that had been consuming my life since the age of four. I would like to say it was the hardest decision of my life…but it wasn’t.

The second it hit me that I wasn’t playing anymore, I was instantly happier. I wish I could say I focused more on my schoolwork, but that was not the case. I had so much more free time to sleep, work, and hang out with my friends outside of soccer.   Of course, there were times I would feel a little regret because these people I had bonded with for so long and so intensely were still on the team. This I felt the most when the team won the conference championship as I watched from the sidelines. On one hand, I was so happy for my friends and their accomplishment, but on the other hand, I was extremely upset I couldn’t be a part of it. But even on that day, I knew I had made the best choice for me.

After 17 years of playing soccer, I felt I had reached a point in which I was burnt out and so tired of the long hours and strain the constant action put on my body.   I do believe that I got a lot out of being a college athlete: I learned how to be a team player, how to efficiently manage my time, and that I needed to work hard in everything that I did.

I do, however, believe that organized sports are so fascist and it makes me sick.

2 thoughts on “giving up the game”