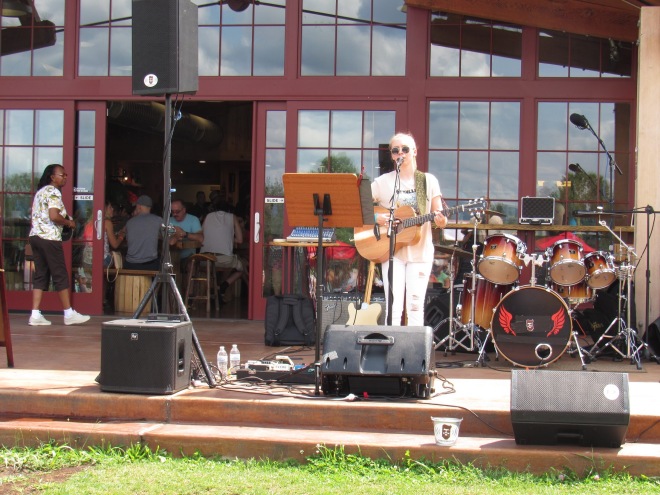 One of the first times Shannon Willis played her guitar “publicly”, she was nowhere to be seen.  Rather, her soft yet powerful voice and the mellow strums of John Lennon’s “Imagine” provided what was supposed to be background music to a performance for a dance class.  The tune captivated the audience and stole the show.

This first show became a metaphor for the performance career of Willis, who, held down by insecurities, never gave herself the freedom to take center stage  and embrace her identity as a performer or as a person.  I sat with her and talked about how self-esteem influences her playing, John Mayer, and her favorite chord (that one’s a throw away, but it’s B7 for those you really want to know).

The LipLiner: What inspired you to start playing guitar?

Shannon Willis: I started playing when I was 18 and in community college.  I didn’t have a job, and I got really depressed because I wasn’t active.  I wanted to play guitar earlier [in life], and I just never played.  Erin (editor’s note: Shannon’s twin sister and also an interesting and talented individual whose commentary is peppered throughout) and I always sang together, but I never felt like I was a good enough to just be singing, so guitar kind of became a crutch that allowed me to sing more. Somewhere along the way I fell in love with playing.

TLL: To clarify, Shannon is mostly self-taught.  Do you think this is more beneficial and the preferred learning method?

SW: I think it would have been tougher to have fallen in love with guitar had I gone to a teacher right away.

TLL: So you feel like your passion was fostered in those self-instructed lessons and then a teacher helped you improve your technique?

SW: Yes! I used to record myself on my computer (editor’s note: Willis would not share these old videos, citing extreme embarrassment) and listen to the same chords and riffs over and over until I was comfortable enough with them to be able to sing as I played.

TLL: How long were you playing before you could listen to yourself and be pleased with what you heard?

TLL: Really? There was no moment you could look at and say “Hey, I’m actually not that bad!”?

SW: I’m still not 100% confident [in playing abilities], but I think I could measure it in how many people I’m comfortable playing in front of.  It used to just be Erin, and then my mom, and then my really close friends, and grew from there.

TLL: Who is your musical inspiration?

SW: John Mayer. He has a lot of structure in his music, he’s very creative, an amazing guitar playing – obviously – and he doesn’t have a traditional singing voice, but it’s really smooth.

TLL: Where do you draw inspiration from?

Erin Willis: I feel like your songs got better once you came out.

SW: I agree.  I can identify more with what I’m writing.

TLL: Did you feel like there was a blockade in your writing before that?

EW: Can I say something? Your songs before you came out sounded like songs that people wanted to hear.  Boy meets girl and all that.

SW: I started writing the most music right after I had come out.  What I wish I could do with my music is let people know that I never saw myself coming out. It’s a cliche, but I wish everyone knew that it actually does get better… as much as it seems like it’s the scariest thing to do, [coming out was] the best thing I’ve done.  I know myself more now. I want to convey that confidence and self-assurance to other people.

TLL: Is it more difficult to write music or lyrics? What’s your writing process like?

SW: They’re both difficult.  It’s hard to think of a unique chord progression because there’s things that just sound good together, and those songs have already been written. I think finding a balance between writing lyrics that aren’t too cliche but not too obscure is challenging as well.  But one day I hope to have enough of my own songs to release an album.

Following this question, Shannon and Erin made a vague reference to Freaky Friday, and it all went awry.  To see when Shannon is playing live and to view updates in-between performances, follow her on Instagram.