Editor’s note: The following interview briefly discusses topics including suicide, self-harm, and depression. If this is something you find yourself struggling with, please visit the National Suicide Prevention Lifeline.

It’s safe to say that we aren’t born knowing what our purpose in life is, and that many of us must conduct an extensive internal search in hopes of uncovering this shrouded enigma.  A lofty goal, sure, but that’s only the first part of it. The next would be enveloping yourself in this mission and actually living it.

On the surface, it seems as though Cydney Irby is not one of those people who had ever struggled: she knows she is supposed to be a vessel of happiness, encouragement, and positivity for others, and as the founder of Dream on Youth (DOY), an organization focused on the betterment of young people’s lives via social engagement, she lives and breathes this mission statement.  However, the origin tale of the organization is not as whimsical as its overarching goal.  Cydney too had to embark on a journey of self-discovery to understand and set forth in her purpose.

This all-female run group (with a goal of expanding and becoming more inclusive in the not-so-distant future) was founded by Cydney in 2012. In an email interview with me at the end of 2017, Cydney told me that her father left her family when she was too young to remember.  Though her stepfather became a part of her life when she was about a year-and-a-half, Cydney struggled with the abandonment issues, grappling constantly with the idea that “the man who helped create me did not want me.” Cydney writes, “It was in early high school when I remember depression nearly winning the first time. I was always the overachiever, the people pleaser. I was a goody-two-shoes, but  was masking a lot. Mostly this insane fear that if I didn’t please everyone, people would leave. If I didn’t like this type of music, I’d have fewer friends. If I wasn’t a certain type of way, I’d never have a boyfriend. I wasn’t black enough to hang with the black kids. If I wasn’t making certain grades, I’d be less loved.” Cydney expressed to me next that in retrospect, these stressors seem to matter less: that of course nothing she could have done would make her mother love her less or would have made her less than, but ultimately this does not change how she processed these emotions and experiences at the time.

The intense and confusing instances were magnified due to a lack of understanding and perspective.  Young people cannot always be afforded the sense of introspection and awareness that Cydney is now armed with.  To say she was overwhelmed is an understatement.   She contemplated ending her life: going through the motions in her mind and even penning a farewell to her best friend. Thankfully, her family intervened, she sought help, and years past.  But when she found herself feeling helpless once again, Cydney prayed to find her purpose.  With inspiration, she created a Twitter account, and under the handle @supportdoyou, she became eager and determined to let people, often strangers, know that though they may feel alone (and oh, how she knew how that felt), they truly are not.  She aimed to establish for others the solidarity she too required.

Now, some five+ years later, this once covert project has blossomed into something truly incredible.  A Twitter handle became a website, and content with the purpose to empower, enlighten, and inspire overflowed.   After running the site on her own for a few years, Cydney opened her passion project up and invited more strangers to be involved – this time as interns.  At the time of publication, she has five. The girls are responsible for blogging, community outreach, and marketing.  Within her team, Cydney is eager to encourage individualism and self-expression: “My belief has always been [that] if there is something you want to do within our organization, show me your work ethic with what I’ve given you now,” she says. “If you can do this, then we can talk about what you want to add on and where your gifts will shine.”

A natural ability for writing, empathizing, and communicating, Cydney uses Dream on Youth 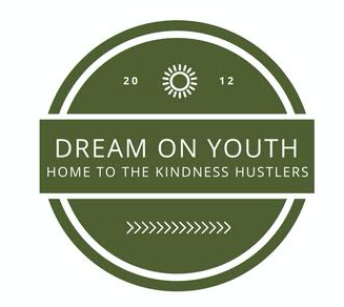 to encourage those who feel low.  This fervent mission is an exercise in protecting those from feeling how she had, or to help them understand that this is not a permanent situation; to give people a sense of purpose and belonging.

This expedition did not come without an initial sense of doubt, however.  Cydney writes, “The first time I distinctly remember feeling overwhelmed, or like I was absolutely crazy was when a guy tweeted me back ‘lol, it’s just song lyrics.’ And while it didn’t stop me, it did deter me from wanting to reach out to men for a while.”  Upon reflection she writes, “…now I wish I had reached out to more young men in the beginning, no matter the backlash I got. But people are people: they’re not always going to like you or want to hear what you have to say, but sometimes people just need someone to try.”

Cydney and her team work completely pro bono, dedicating somewhere between 10-15 hours a week to their work. My personal favorite facet of their work is a Twitter campaign entitled #SelfWorthWednesday, where they encourage users to showcase photos and messages about the self to encourage self-love. But it does not end there —  Cydney has lofty goals: aiming to have the organization officially registered as a non-profit sometime during this year as well as establish both a local office (the organization is based in North Carolina) and a “house” to serve as a conference center and creative hub for the entrepreneurial ambitions of young people.  For now, their work is more or less reliant on the internet, effectively challenging the negative connotation often associated with a younger generation and their relationship with social media.  “Social media is a tool, just like money. Money has a bad rep too, and yet have you seen the good money can do if we let it? Do you see the lives it can change and the financial freedom it can bless people with?” she asks. “Social media is the same way. It has created communities where people choose friends who quickly become family and businesses [that] thrive when locally they would [not] have gotten the same exposure.”

Those who work for Dream on Youth are not naive. They know that not everyone will be willing to seek comfort or disclose information about their struggles simply because they are prompted to.  But they work to fight the stigmas against this inability to be candid in hopes that people find it easier to reach out to someone when they’re hurting.  Cydney relates, and tells me that she had to be honest with herself when she was struggling. This effectively created a path for the work she does now. “…it’s not selfish to carve out the time to take care of yourself and check in.” She continues: “My suggestion to anyone who is struggling like I did: start with self-care. Start carving out an hour in the morning to do what makes you feel like you’re on top of the world. Write down what you want to accomplish. Play your favorite music. Listen to a podcast or an audiobook. Do that skincare routine. Figure out who you are, who you want to be, and where you want to go without the input of others.”

If you’re interested in learning more about Dream on Youth’s work, I encourage you to follow their social media channels. The team hinted at a social good tour for 2019, and if you want to see them in your city (who wouldn’t?), drop them a line!

One thought on “cydney irby, DREAM ON YOUTH boss lady”