Last month I set out to Dover, Delaware for my first-ever music / camping festival, Firefly.  This was unlike anything I’ve done before: the closest I had come to camping prior was sleeping in a tent in my backyard with some friends one night in high school.  I’m pretty sure we all went inside when it got too cold.

But this (obviously) was different. Luckily, I went with a bunch of people who were familiar with camping festivals as a whole as well as Firefly in particular, and they definitely saved me from making tons of rookie mistakes.  I had less time to worry and more time to just enjoy myself. Here’s my assessment (don’t I make everything sound like so much fun?!) of different aspects of the festival:

By the time we had unpacked two cars’ worth of stuff and set up three tents, I simply did not want to set up the air mattress I had packed. I’ll be fine, I thought to myself, I’ve got plenty of blankets and enough of those equate an air mattress, basically. …I was wrong. Sleeping on the ground for five days will take a toll on you physically. Save yourself even a little discomfort and invest in an air mattress.

I feel like I should first say that I was so impressed by the grounds on which camping was held because there were always people going around cleaning, especially the porta-potties. My heart goes out to the people whose job it is, because I definitely don’t have a strong enough stomach to even think about the filth they deal with. That being said, it’s worth it to be a little diligent about when they’re cleaning so that you can get to a facility before it’s been worn.

As for showers, my group had a portable tent that came with a bag you filled up that then trickled out of a funnel. It does the job, but if there are hot showers you can pay for, invest your $5 in the memory of what running what feels like. Keep in mind that you are in the sun for four days and to not be covered in a layer of dirt for one of them is wonderful.

Does this warrant a lengthy description? Take care of yourself and invest in a Camelback.

Truly, I think we spent more money on ice than anything else. But it’s important, especially if you’re brought cold cuts or a grill and are planning on making burgers and hot dogs. (PS: Buy a portable grill but recognize you’re never going to want to eat hot dogs ever again).

I definitely underestimated the amount of supplies we were going to need at the campsite, seemingly forgetting that this outdoor plaza would serve as my home. Pack accordingly.

Sure, everyone loves Doritos, but after spending 10+ hours in the hot sun dancing and being active all day, you’re going to watch something that can actually provide you with sustenance. Think things that will hold you over for long periods of time before your next meal: nuts, Cliff Bars, fruit. 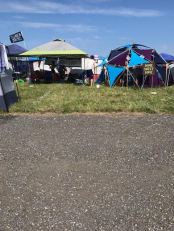 I feel like the shows themselves deserve their own post so that I can fully flesh out the most important part of the festival, so check back for part two!

One thought on “my (kind of late) firefly round-up pt. 1”