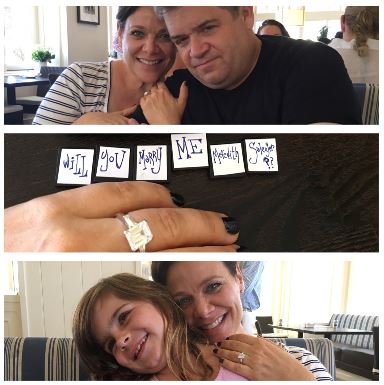 Patton Oswalt is one of my favorite comedians for a multitude of reasons: his album Finest Hour was the first physical copy of a comedy album I purchased; he embraces his love of nerd culture and celebrates the idea that it is okay for people to love what they love; he makes me giggle each time I see a parking enforcement car making its round on the streets, thinking about what a world we would live in if it were advertised as Parking Enforcement & Homicide. (It’s a great bit you should look up because no retelling of a joke is ever as funny as the joke itself).  However, most importantly, I admire Oswalt’s always candid nature when speaking about grave matters including his battle with depression.

It is because of this honesty that every part of my heart went out to him when his wife, Michelle McNamara suddenly passed away in April of 2016.  The couple was married in 2005 and have one daughter — Alice, whom Oswalt calls his “nugget of endorphins“.  My heart broke for a man who had been so honest about his suffering even prior to experience something of this nature.  I could not begin (nor would I ever want to) to imagine what he was feeling.

This past weekend, Oswalt announced that he is engaged to Meredith Salenger.  My siblings, friends, and I were all thrilled that someone who had suffered such a devastating loss was able to pick himself up and not only seek, but successfully find, the comfort that romantic companionship allows.

….The Internet, however, was less than excited about these impending nuptials.  I saw so many comments from people shaming Oswalt for this choice, claiming that he couldn’t have loved McNamara in the first place if he was able to “move on so quickly.”  To make these claims are wrong and out-of-place, especially when considering that this new engagement does not negate anything that Patton and McNamara experienced during their time together. Unfortunately boisterous claims are not unheard of as a result of how accessible people’s lives are to others via social media.

I think that it’s wonderful that two people have found one another and are looking forward to building a life together with and for Oswalt’s daughter, whom Oswalt’s love for is quite apparent.

If it is not your personal hurdle, how are you to say how long it is before a person must remain a recluse? Ultimately, there is no time-table we can assign with certainty to grief, and because of that, we have to respect and allow people to overcome their obstacles with as much or as little time as they need.